The best example of the beauty of the Buddhist architecture of Luang Prabang is the Wat Xieng Thong Temple. This Wat Xieng Thong Temple, built in the year 1560 and whose literal translation means Temple of the Golden City, is a masterpiece decorated with mosaics and carvings in wood that Nam Khan rises next to the Mekong River and the River in the historic centre of the city of Luang Prabang (Laos). 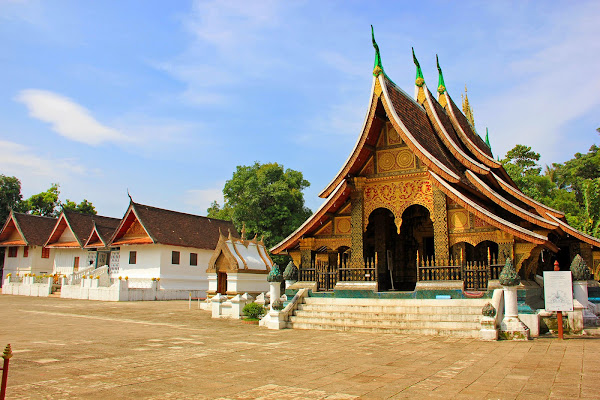 Wat Xieng Thong
Wat Xieng Thong was used from its origins as a Royal Temple where are they crowned the Kings of Laos and also as monastery. The temple is known as the gate of the city as the official Royal departed and arrived at this place. After the fall of the monarchy in Laos at the hands of the party communist Pathet Lao in 1975, Temple Wat Xieng Thong was used as a Royal Temple. The temple has been destroyed and rebuilt on several occasions, then it should be noted that Wat Xieng Thong was little that sobrevio to the Chinese looters of the black flag in 1887. Wat Xieng Thong major remodeling took place in the year 1960, trying to preserve its original essence, the roofs were repaired, painted carvings were restored, was awarded a golden color bath and mosaics were added. 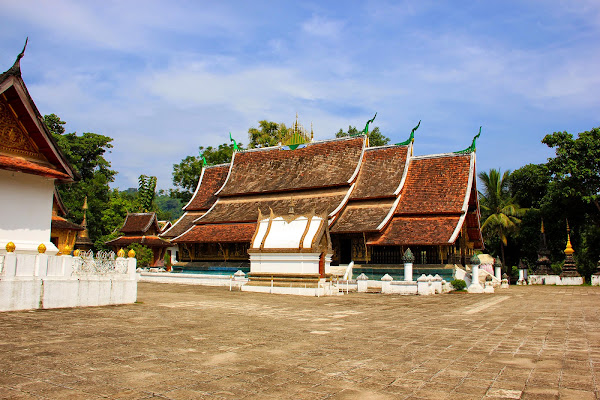 Wat Xieng Thong Ratsavoravihanh
Decorated with mosaics of incalculable value, ornamented with carvings in wood only in Buddhism and rare treasures as a funeral carriage of 12 meters, the temple Wat Xieng Thong is one of the stars of the city of Luang Prabang.

The Tree of Life 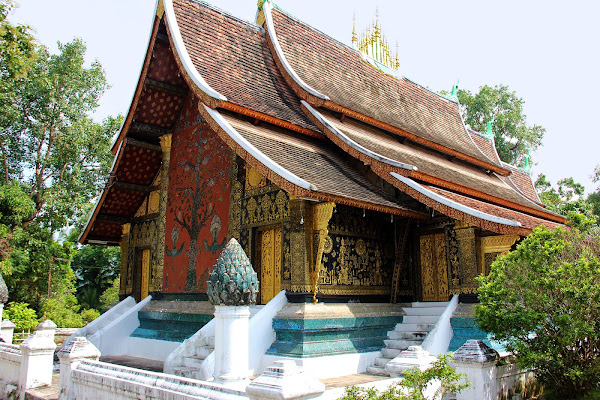 Legend of how the tree of life mosaic has built the temple Wat Xieng Thong, whose legend has it that 2 hermits decided to create the temple next to a tree of fire on the banks of the river. 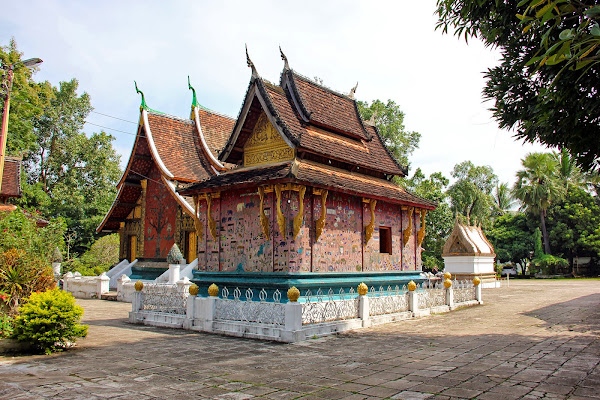 Temple of the golden city

One of unique relics that keeps the temple Wat Xieng Thong is a funeral carriage, the carriage is located in a building decorated with teak wood carvings painted in golden color of exquisite detail, these wood carvings depicting scenes from the book Holy Ramayana. 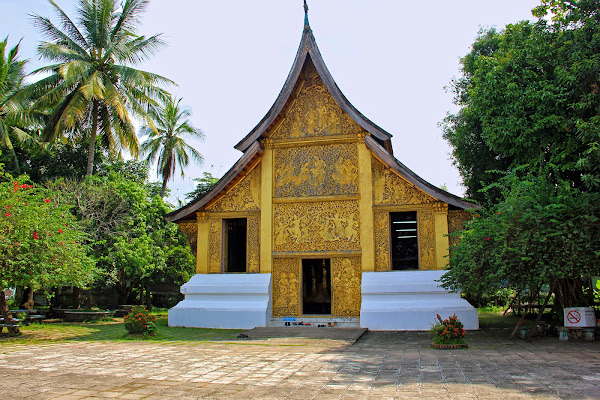 The funeral carriage once toured the streets of the city of Luang Prabang, carrying the mortal remains of the last Kings of Laos. It impresses the detail of the float with the 7-headed serpent. 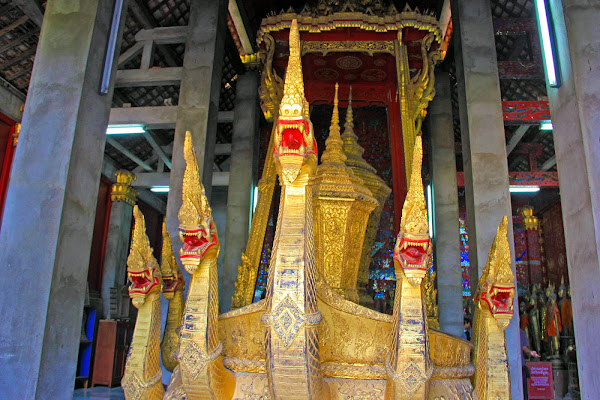 This carriage, whose name is Royal cremation chariot, carries an urn containing the remains of the last Kings of Laos. 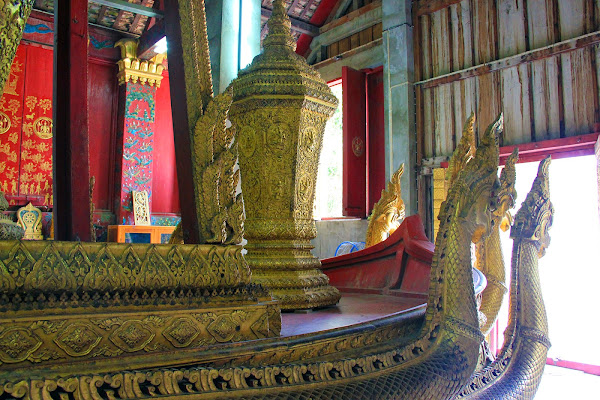 The chariot of cremation occupies the entire space, leaving only a small hole next to the walls occupied by statues of Buddha. The walls are decorated with mosaics representing everyday scenes of life in Laos. 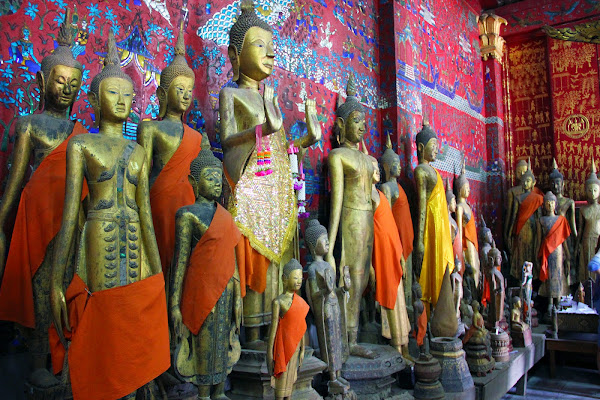 The most important building of all who make up Wat Xieng Thong is the ordination Hall, main building decorated in wood and whose rear façade is the tree of life. 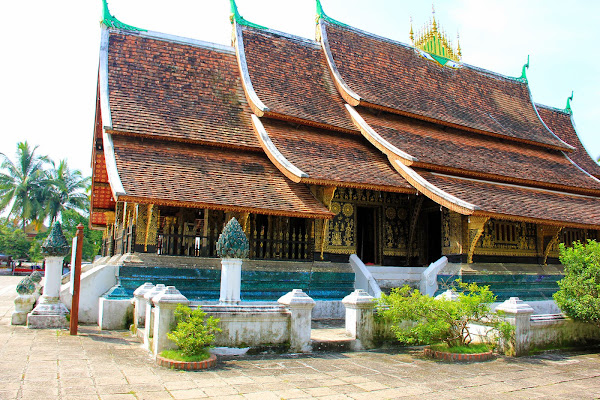 The most impressive of the ordination Hall are roofs on three levels that descend almost to touch the ground, with the rising of the Sun, Golden wood carvings show all its brilliance and splendor, a very nice contrast dark wood with carved gilded counterpart of the mosaics in blue base glass. 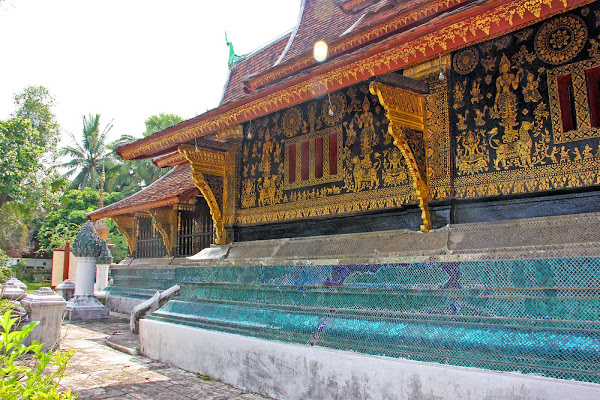 Inside the ordination hall where kings were crowned until 1975, there is a small altar. 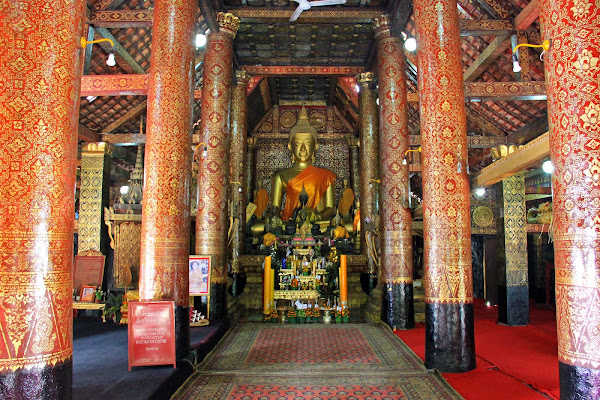 Inside the temple Wat Xieng Thong

One of the largest structures near the main temple is known by French historians such as La Chapelle Rouge, i.e. the Red Chapel. Inside is a bronze sculpture of reclining Buddha believed dates back to the origins of the temple Wat Xieng Thong. 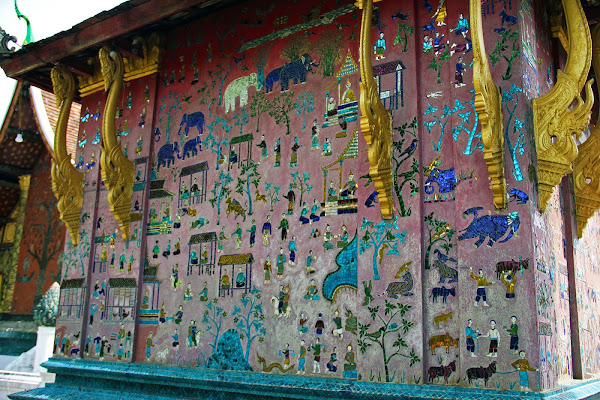 He was built in 1828 the Tripitaka library which is to host the sacred Tripitaka Scriptures, this building is closed and is not possible to access to its interior.

This small canopy supported by 4 columns double roof called the Pavilion of the seated Buddha located in the gardens of the temple Wat Xieng Thong. 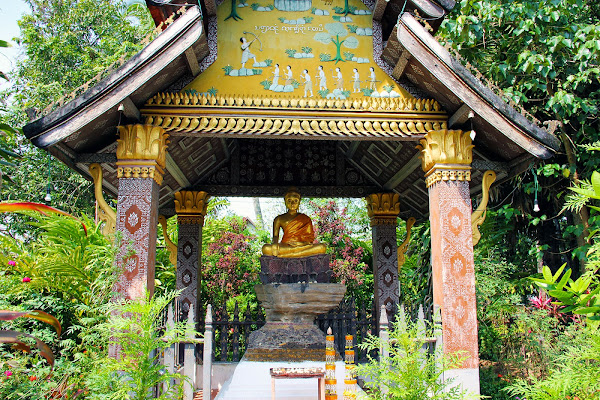 In the courtyard of the temple Wat Xieng Thong highlight is the drum tower, pavilion sitting Buddha and stupas which decorate the place. 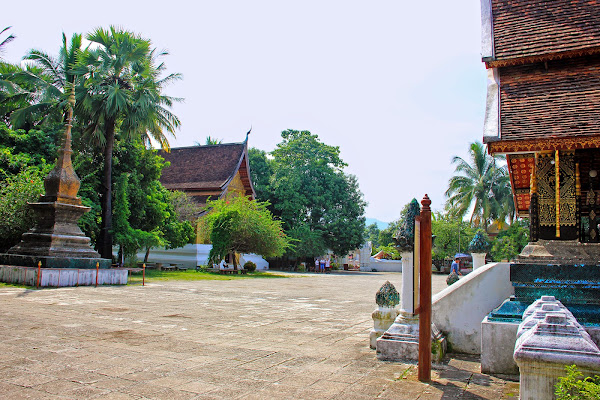 Next to the flag of the sitting Buddha stupas there are 2, one of these stupas is beautifully decorated with blue mosaic crystals. 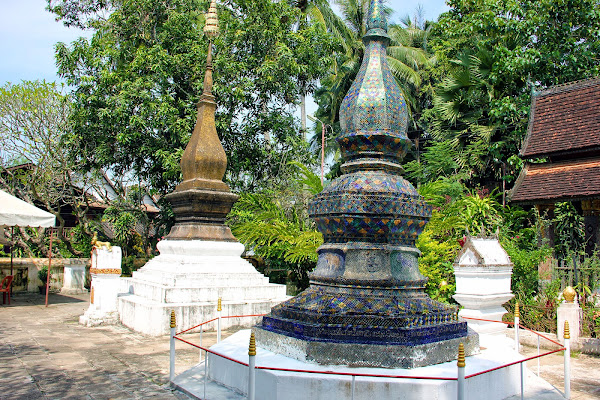 Stupas in the courtyard of Wat Xieng Thong