Sense the bustling streets and modern facades in Vietnam to absorb in the endlessly spiritual traditions. Gain an understanding about the symbolic Cao Dai religion, amble through forest monasteries and converse with Buddhist monks. Meet Tai Chi masters, craftsmen and other locals to learn about the complex belief systems of Vietnamese people.

From Tan Son Nhat Airport to your chosen hotel in HCMC (8km): 20min

Upon arrival to Ho Chi Minh City, you will be transferred to the hotel by our driver and tour guide for check in. Then, the rest of the day is at your leisure.


As one of Asia’s most eclectic cities, Ho Chi Minh City is best explored on foot.

Pick-up stage begins around 8:00 from the hotel for a drive to the starting point. First, enter a charming and buzzling local market and weave through tiny back alleys into some of the most hospitable neighborhoods in the city. Venture into a small temple to pay tribute to 5 mother goddesses before continuing to a monastery where the monks are eager to show their home and provide astrology readings.

Arriving to Tay Ninh, pay a visit to the Cao Dai Great Temple, with mystical architecture and a belief system that combines all the world’s major faiths.

After lunch in a local restaurant, visit the famous Cu Chi Tunnels. These subterranean hideouts consist of an incredible underground tunnel network constructed by Vietnamese resistance fighters (Viet Cong) during both the French and American wars. In the late afternoon, journey back to Ho Chi Minh City.

After breakfast, transfer to Tan Son Nhat Airport for the short flight to the central port city of Danang. On arrival to Danang, our guide and driver will be waiting to provide transport to Hoi An Ancient Town, a major Asian trading port in the 17th and 18th centuries.

After checking in to the hotel, embark on a cyclo tour of the ancient town, passing by former merchants’ homes, the 400 year-old Japanese Covered Bridge and the colourful central market.

Enjoy the remainder of the day at leisure.

Accommodation: Hotel in Hoi An

HOI AN ANCIENT TOWN AT NIGHT

Afterwards, enjoy an hour-long lantern making class. Hoi An’s traditional lanterns are very famous and bring a beautiful charm to houses and streets. While creating a miniature lantern, learn about Vietnamese life through interesting discussions with the class instructor and Lifestart members.

In the afternoon, leave Hoi An for Hue, the former imperial capital of Vietnam. Its mesmerizing tombs and mausoleums of the last emperors of Vietnam reveal fascinating insights into the lives of the imperial families and their subjects.

Depart Hoi An for the drive through Danang before climbing over the Pass of Ocean Clouds and dropping down to the wonderfully photogenic fishing village of Lang Co. Stop for some photos and continue the drive north to Hue.

Your chosen hotel in Hue to the Garden of Hue (5km): 10mins

Start off the morning in Hue with a visit to a quiet and peaceful pagoda located in a pine forest.  One of the most interesting parts of the pagoda is the eunuch tombs from the former Royal Court, which are found only in this destination. If the itinerary falls on a Thursday or Sunday morning, join up to 20 Buddhist monks and nuns who gather together to pray and read aloud scriptures. This pagoda is internationally recognized for being the monastery where Zen Master Thich Nhat Hanh studied as a novice monk.

After the visit, journey on to Minh Mang’s Tomb, which is which is located in a tranquil setting of gardens and ponds.

In the afternoon, explore the Imperial Citadel where the Nguyen Dynasty ruled between 1802 and 1945. The ancient citadel reflects the pomp and ceremony of the dynastic rulers as well as the scars of many years of turmoil, both ancient and modern (the Royal Citadel was badly damaged in the latter stages of the war).

From here, transfer to the airport for the 1-hour flight to Hanoi. On arrival, our driver will be waiting to provide transport to the hotel.

Wake early today and head to one of Hanoi’s oldest temples for a 1-hour Tai Chi session with Master Vuong. Proper breathing and concentration are an integral part of the practice; the Tai Chi taught is suitable for all backgrounds and capabilities.

After breakfast at the hotel, visit Hanoi’s sights including the Temple of Literature, Vietnam’s first university. Founded in 1076, Quoc Tu Giam was established within a temple to educate Vietnam's royalty, mandarins and members of the elite.

Continue on to the picturesque West Lake and the 6th century Tran Quoc Buddhist Pagoda. From here, transfer (or stroll along the lakeside) 700 meters to the nearby Taoist temple of Quan Thanh.

In the afternoon, visit an internationally recognized traditional Vietnamese doctor. Based in Hanoi, Dr Huong is an expert in Traditional Eastern Methods through Acupuncture, Acupressure and Catgut Implantation in Hanoi. Follow up with a visit to ‘traditional medicine street’, offering an array of traditional medicinal herbs and spices.

This evening, head to the southwest part of Hanoi, a region famous for being the first place bombed by a B52 during the American war. Start with a cup of Vietnamese tea followed by a traditional meal, served on a modern style dining table. After the meal, the host will play a traditional one-stringed musical instrument. At the end of the dinner, return to the hotel. 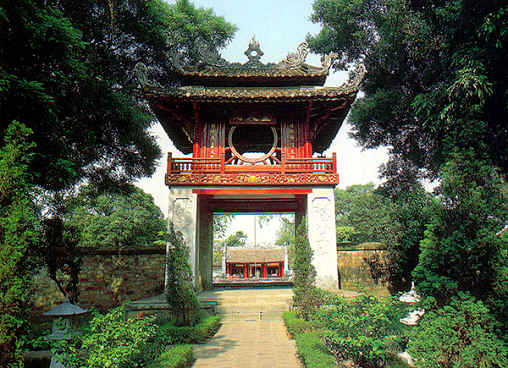 After breakfast, depart Hanoi for the overnight boat trip on Halong Bay. The journey there carries through the rich farmlands of the Red River Delta, displaying the everyday life of Vietnamese villagers.

Arrive in Halong City late in the morning. Board the traditional wooden junk or The Emeraude, a classic replica steamship of the colonial era, for the overnight journey into the Bay. Lunch will be served en route while cruising along the iconic limestone formations. Towards the end of the day, set anchor for the night. As the sun sets over the bay, dinner is served on board with fresh seafood, salads and fruits. 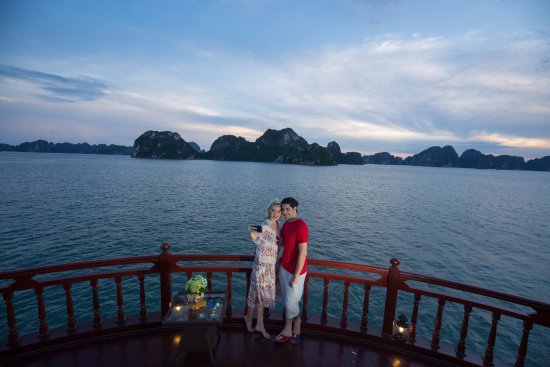 This morning enjoy a wholesome brunch as the boat weaves back to port through strange-shaped limestone rock formations. Upon disembarkation, the driver will be waiting to provide transport back to Hanoi.

*As an optional extra and depending to the departing flight, there may be time to stop for a visit to one of the oldest pagodas in Vietnam ‘But Thap’ on the way back to Hanoi.

Enjoy the remainder of the day free at leisure until transport (provided) to the airport for departing flight.

Any part of this itinerary can be altered to fit your need, e.g.accommodation, add/skip city, tour length...

Why book with us?

There are at least 2 reasons why you should book Viet Odyssey Travel and tour on our website.